The social distancing regime we are being asked to adopt during this COVID-19 pandemic practically screams a five-letter word at me: WRITE! So I guess I will… 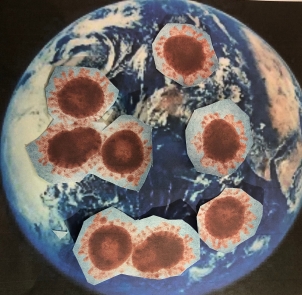 The time is ticking by so slowly. My most recent high-risk encounter was last Thursday, riding a crowded el train. So, 10 more days to go before I’m most likely virus negative. The fear that, in the past two weeks, I’ve somehow contracted the disease is haunting me, as I’m sure it is many others, especially those my age. In many ways it’s a relief that Chicago and Illinois are shutting everything down. Now I don’t have to worry that I’m missing something. In the meantime we’ll be watching movies on the tube (actually, it’s not a tube anymore, is it?) and trying to cook inventive meals that don’t send us out shopping to often.

Social distancing dawned on me slowly. Armed with sanitizing wipes and spray, I was taking the el, but trying to move in non-rush-hour times. I’ve visited with friends, gone to the health club, had dinner out, gone to a doctor’s appointment, had a haircut, sat in a coffee house, spent time in grocery stores and played basketball with two of the groups I belong to that have weekly games.

All of that has pretty much gone by the wayside now. We’re staying home most of the time. We go out for walks, trying to stay on side streets and giving passing walkers plenty of space.

As is my wont, I’ve been trying to think of this crisis in terms of climate change. If you start browsing around, you’ll see sources bemoaning the ironic fact that our reaction to this crisis, in terms of economic resources spent, media attention and political responsiveness, dwarfs our response to the climate crisis. Yet if we don’t mobilize an urgent response to the climate crisis, it is certain to cause more harm to humans than this awful virus will ever do.

But the question I have asked myself is, “Does climate change make this kind of pandemic more likely?” Though we can’t say climate change caused the disease, the answer seems to be, “Yes!” Here are some samples of readings I found that reinforced that conclusion:

In this piece the author argues that not only does climate change make epidemics more likely, it also lowers humans’ natural resistance to these pathogens: The Wuhan Coronavirus, Climate Change, and Future Epidemics.

On WhatsOrb, Global Sustainability X-Change website, I found this: “(W)ith climate change ramping up, we are about to enter a new phase of epidemics, pandemics and the spread of diseases like the flu. Climate change might even amplify its causes and effects and lead to the creation of mutated, vaccine-resistant strains that can be equally hard to control and contain.”

From a blog on the State of the Planet Earth Institute at Columbia University, an explanation of where the new coronavirus came from and what is the role of climate change in this process:

Kris Murray, senior research scientist at EcoHealth Alliance, an organization that researches and educates about the relationships between wildlife, ecosystems and human health, says, “(S)ome of our computer modeling suggests that with climate change, in parts of central and western Africa, the range of some bat species could expand…this means increased contact between bats and humans.” He was talking about Ebola, but COVID-19 also seems to be bat-related.

According to the United States Agency for International Development, “nearly 75 percent of all new, emerging, or re-emerging diseases affecting humans at the beginning of the 21st century are zoonotic — meaning they originate in animals. These include AIDS, SARS, H5N1 avian flu and the H1N1 flu.” And ditto for COVID-19.

The WHO has warned that contagious diseases are on the increase as a result of “the combined impacts of rapid demographic, environmental, social, technological and other changes in our ways-of-living. Climate change will also affect infectious disease occurrence.”

Extreme weather events can produce a cascade of other effects that influence disease. Heat and droughts create dry conditions, providing fuel for forest fires that end up fragmenting forests and driving wildlife closer to humans. Droughts and floods affect crop yield, sometimes resulting in malnutrition, which makes people more vulnerable to disease while forcing them to find other food sources. Flooding can provide breeding grounds for insects and cause water contamination, leading to the spread of diarrheal diseases like cholera. Moreover, extreme weather can disrupt the finely tuned relationships between predators and prey, and competitors that keep pathogen-carrying pests like mice and mosquitoes in check.

If you got this far without becoming cross-eyed, I have a recommendation for you: Check out Dispatches from a Pandemic in Another Chicago Magazine. (Full disclosure, my wife, Sandi Wisenberg, edits ACM.) There’s only one entry now, but more are coming.

2 thoughts on “Can we blame this pandemic on climate change?”