Bubbly Creek is still bubbling, though it’s been decades since the Chicago Union Stockyards and the surrounding slaughterhouses and meatpackers quit dumping blood, entrails, grease, meatpacking waste and who-knows-what-else into the stagnant waterway that connects to the Chicago River. 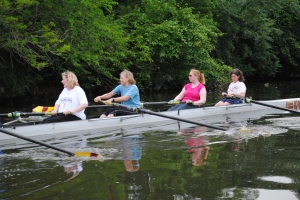 I got interested in Bubbly because my wife, Sandi Wisenberg, aka Cancer Bitch, rows on it. She’s part of Recovery on Water (ROW), a “rowing team that gives survivors of breast cancer the unique opportunity to interact, become active in their recovery, and gain support from fellow survivors.” They do this mainly because, “Regular exercise has been shown to reduce cancer recurrence in patients treated for breast cancer by up to 50%.” And because they have a really good time in the process of getting and staying fit.

When the weather is temperate, they row on Bubbly Creek, and besides unsavory encounters with floating condoms, sanitary pads and feces, the rowers have to contend with some very foul odors, especially on a hot summer evening.

The bubbles and the odors come from the continuing decomposition of still-decaying organic matter courtesy of the guys who made their millions putting beef, pork and lamb on American tables. As early as 1906, Upton Sinclair’s muckraking novel “The Jungle” reported on, among other horrors, the meatpackers’ desecration of what was once a wetland teeming with wildlife.

“…it is really a great open sewer a hundred or two feet wide,” Sinclair wrote. “…every now and then the surface would catch on fire and burn furiously.”

Officially known as the South Fork of the South Branch of the Chicago River, Bubbly Creek was created to drain the wetland so the land could be built on. A mile-long channel was dredged to drain it, starting at the river and ending about a mile south. Eventually the meatpacking district grew up just south of there.

The stockyards are gone, but Bubbly still has plenty of problems unrelated to the entrails of hogs and cattle. Chicago has a combined sewage system, which means that sanitary sewers and stormwater sewers flow into the same pipes. In a hard rain, the system can’t handle all of the combined flow. The overflow, which includes household, commercial and industrial sewage, goes into waterways, including Lake Michigan, the Chicago River and, of course, Bubbly Creek. In addition there are still a number of industrial operations along the creek and at least some of them have pipes that empty nasty stuff into the creek.

Thanks to federal and state clean water laws, the lake and the river are being cleaned up, or are moving in that direction. Think the still-in-progress Deep Tunnel project. But because little Bubbly is stagnant, and therefore supposedly isn’t adding much pollution to the river, it’s cleanup plans are on a different, slower track.

Enter the University of Chicago Law School’s Abrams Environmental Law Clinic. At the suggestion of a ROW member, a group of students, under the auspices of Abrams faculty, have dug into Bubbly Creek’s public policy muck and seem determined to push the powers that be – chiefly the state and federal Environmental Protection agencies and the Metropolitan Water Reclamation District – into cleaning up this small but highly toxic waterway.

ROW surely has more than a passing interest in all this. Spurred by the yuck factor they experience on the creek, the rowers were glad to welcome these student-activists to ROW headquarters (in the Bridgeport Arts Center, which is perched almost on the bank of Bubbly) where they presented much of the information that went into this blog post.

The ROWers aren’t alone, of course. The Sierra Club, Friends of the Chicago River and other environmental groups have been involved in pushing for a cleanup.

Besides urging them to stay informed, the law clinic students have enlisted the rowers to add their eyes to the effort, reporting to Abrams whenever they see effluent going into the creek from any of the open pipes along the banks and “especially regarding dumping, runoff, and clean-up efforts.”

I was glad Sandi brought me along to hear the Abrams students’ report. We’ll all be better off if Bubbly Creek, the Chicago River and all such urban waterways reach the goal of fishable, swimmable and drinkable.