Not because I believe, as the organizers wistfully claim, that if enough people get involved it will “change everything,” but because I haven’t really figured out what role I can play in the fight to reverse global warming. Organizers predict a crowd of a couple hundred thousand, so maybe I can find someone who will give me a clue. 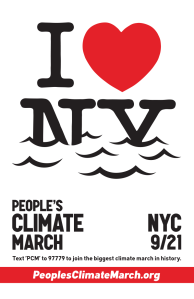 Of course there’s plenty of disunity. Some of the more radical groups point out that some of the worst corporate polluters are supporting the march, condemning it to watered down results that will change nothing.

Unfortunately, one of the organization’s slogans, “To change everything, we need everyone,” is already admitting defeat, since they know they aren’t getting everyone. Still, with a UN summit on climate change scheduled in New York for two days after the march, it can’t hurt to have a couple hundred thousand people making noise. Or can it?

As always, when people organize, there are those who think they have the answer:

Others on the left have plans of their own, of course: “to confront the corporate and economic systems that are causing the climate crisis.” http://floodwallstreet.net/

“Direct action” is their watchword, and the success of the Occupy movements around the country in bringing the issue of income inequality to the forefront makes those tactics seem appealing.

Then there are the liberals, led most visibly by Al Gore and his Climate Reality operation, whose latest foray is: 24 Hours of Reality: 24 Reasons for Hope

And of course there will be the parasites. Whenever someone does the hard work of organizing, they are the ones who show up to push their often barely tangentially related agendas.

One fascinating aspect of the main organizing group’s website is the “Find your group” section, which you can locate by scrolling down on this page: http://peoplesclimate.org/organizing/.

In it, there’s the bike bloc, the Buddhists and other mindful activists, the Deep South, immigrant communities, Labor, Phoenix, photographers, vegans, Canada, arts, faith and many, many more.

Here’s the thing. I feel compelled to do something. I owe it to my kids, my grandkids, my fellow humans, to try, in my own small way, to help reverse the catastrophe we have been creating by blithely filling our atmosphere with greenhouse gases.

So, despite my curmudgeonly vein of skepticism (Sandi says if I was really a curmudgeon, I’d tell everybody to stay home because the carbon footprint of travelling to NYC will be so large), I booked a spot on the train to New York that will be filled with others on the way to the march. I found a place to stay. And I’ll tell you more as soon as I can.

2 thoughts on “Off to New York to “change everything””